Business school term for presentations that are short on facts and substantive detail, but made in a glossy if interminable fashion, using a large number of Microsoft PowerPoint slides, droning on and on, slide after slide (an activity analogised to hypnotising chickens), while the audience eyes the door, fiddles with smartphones and discovers a sudden urge to go to the bathroom. PowerPoint’s overuse in organizations is frequently criticized, in part because PowerPoint is, in principle, a sales tool that allows users to gloss over key facts and details and is often alleged to be overly persuasive. It may also be the case that the sheer tedium of enduring a protracted PowerPoint presentation causes members of the audience to fail to appreciate the significance of certain items of its content.

PowerPoint’s overuse was, for example, held to have been part of the internal NASA procedural failures that resulted in the loss of the Space Shuttle Columbia. See, Columbia Accident Investigation Board: Final Report, 2003, Vol. 1 at pages 182 and 191. See also, PowerPoint is Evil: Power Corrupts. PowerPoint Corrupts Absolutely, Wired Magazine, September 11, 2003.  The overuse of PowerPoint by the US military in planning has also been criticised, See We Have Met the Enemy and He Is PowerPoint April 26, 2010, which included a remarkably incomprehensible and confused US military PowerPoint slide intended to explain US strategy in Afghanistan reproduced in a subsequent Congressional Audit Office report: 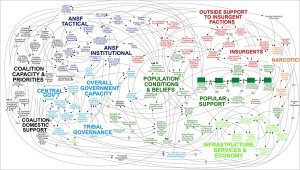 More recently, overuse of PowerPoint at GM was a part of the corporate culture said to have contributed to an ignition key defect that led to the deaths of 15 people and 2014 recall of a millions of GM vehicles. There is at least some suggestion that oblique references to the problem in a single slide of one seventy two slide PowerPoint presentation were not ‘picked up on’ by managers in the audience, including the CEO, because they were bored senseless by it and readily distracted by more immediate issues – indeed, most appeared not to even remember the entire presentation.

Contribute to the Glossary